The beginning of ITE Alumni Association goes back to the year 1996. It was then that the idea of an association for ITE graduates was first mooted and the man behind it was Dr Tony Tan Keng Yam, then Deputy Prime Minister and Minister for Defence, who officiated at the Official Opening of ITE Headquarters in June 1996.

By November 1996, a small group of 15 energetic and enthusiastic ITE graduates came together to form a pro-tem committee to kick-start the formation of the alumni body. And 3 months later, on 17 Feb 1997, ITE Alumni Association was officially established and registered with Registrar of Societies, Singapore. With Mr Peter Chen, then Senior Minister of State for Education, as its Patron and Dr Law Song Seng, Director and CEO of ITE, its Adviser, the Association held its Inaugural Ceremony on 12 Apr 1997 at Hyatt Regency Singapore to elect its office bearers for the Management Committee to execute the business of the Association.

Since then, the ITE Alumni Association, as a non-profit making organisation, has gained the support of many ITE graduates as well as on-going ITE students. 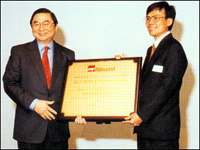